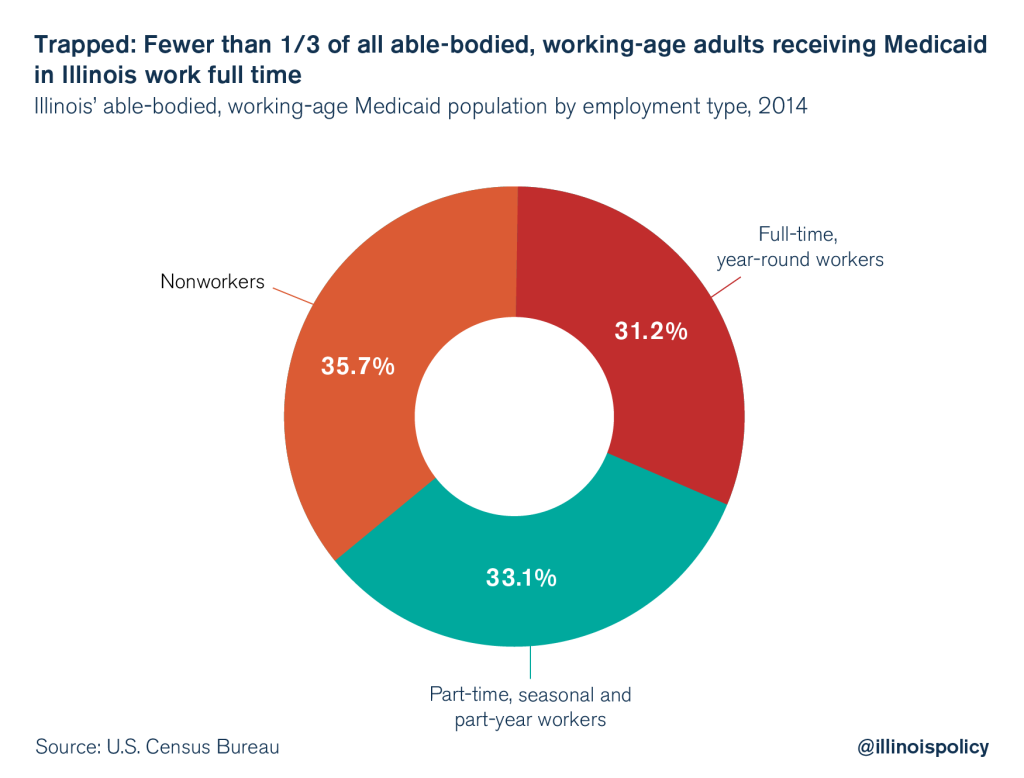 In addition, according to data from the Department of Healthcare and Family Services, nearly 54 percent of able-bodied adult enrollees in the Medicaid expansion reported no income at all in 2015.

In both cases, these are non-disabled adults in their prime working years. Yet far too many of these adults are not working at all – despite the fact that working just roughly 27 hours per week at minimum wage would pull them out of poverty entirely.

When Kansas reinstated work requirements in its food stamp program, adults went back to work in droves and their incomes more than doubled – more than enough to offset lost welfare benefits. Enrollment also fell by 75 percent. Maine has also seen similar results after reform.

What Maine and Kansas have witnessed is an elimination of the welfare cliff: Because enrollees are now better off than they were before the institution of work requirements, the penalty for leaving welfare is essentially gone. This is a success story that Illinois can replicate.

Regardless of what Congress does, Illinois can and should act. The Rauner administration should immediately compose a waiver request to institute work requirements for non-disabled adults in Medicaid to submit to the Trump administration.

(While Illinois officials are at it, they should also eliminate the work requirement exemption for food stamps.)

Work requirements, coupled with an enrollment freeze, would accelerate Obamacare Medicaid expansion enrollees’ transition to self-sufficiency. They would also provide a much-needed hand up to non-disabled adults in the traditional Medicaid program, over a third of whom are not working at all and could use a boost. And as these reforms reduce caseloads and move non-disabled adults toward independence, more tax dollars will be freed up for the state’s truly vulnerable. This is a commonsense path forward for Illinois.

This article originally appeared at the Illinois Policy Institute on January 24, 2017.