And enrollment freezes are effective, largely because poverty is a short-term situation for most individuals. Data from the U.S. Census Bureau indicate the median time a person spends in poverty is just over six and a half months. So, by closing the front door to the program, enrollees transition off of the program as their incomes rise, just as they would anyway, but no new enrollees are allowed on to the program to take their place. Other states have successfully used this approach to wind down their Medicaid expansions

Arizona, Maine saw people drop out of Medicaid on their own after freezes
After expanding Medicaid to able-bodied, childless adults in 2000, Arizona’s Medicaid expansion spiraled out of control and required the state to stop enrollment. At the time the freeze went into effect, 230,000 adults were on the program. But during first year of the freeze, enrollment dropped by more than 5.5 percent per month and, by the end of the first year, nearly 115,000 adults (49 percent) had left the program. This natural attrition continued beyond the first year, with nearly 155,000 adults (67 percent) transitioning out by the end of the second year. 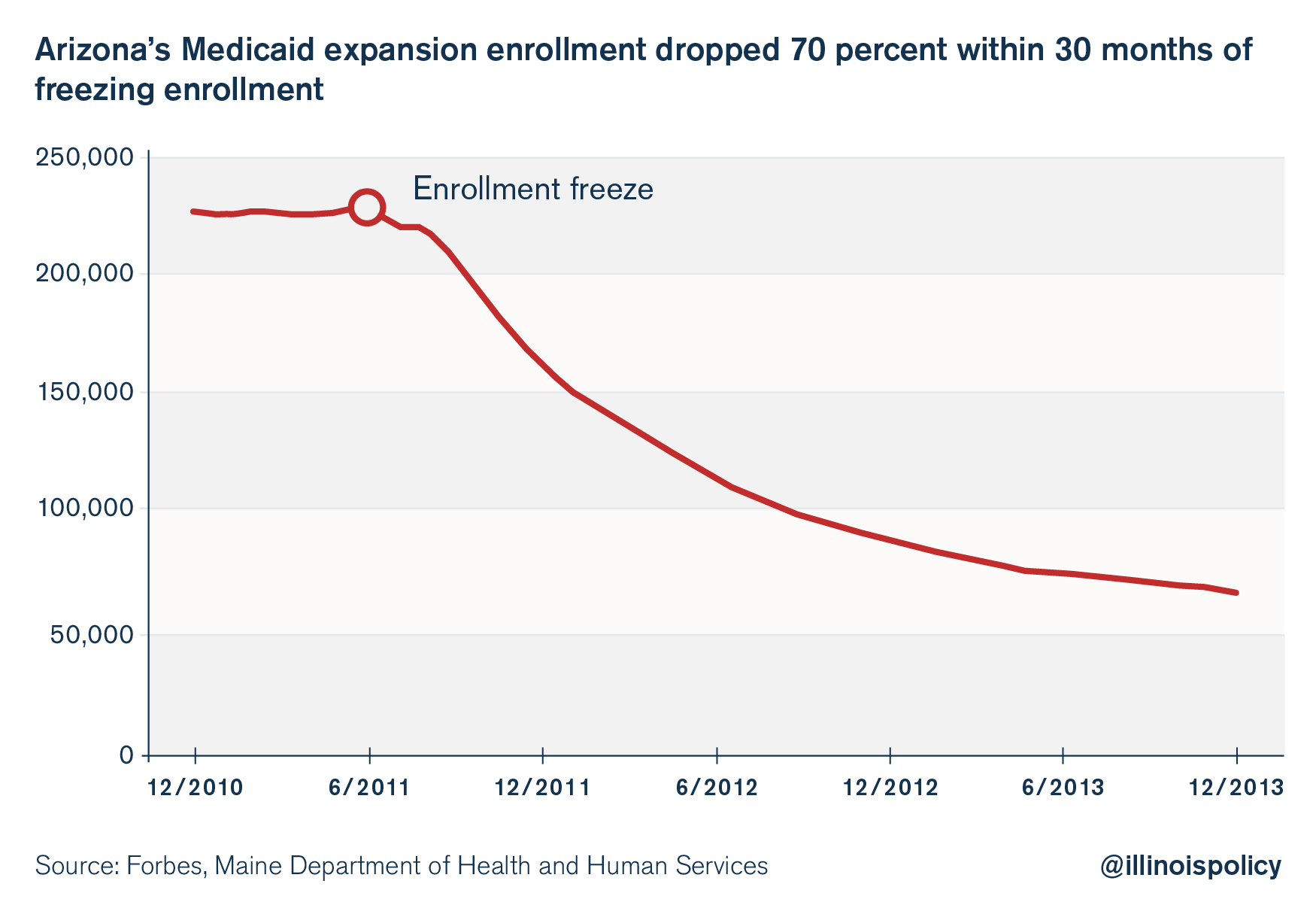 Additionally, in 2002, Maine expanded Medicaid eligibility to able-bodied, childless adults below the federal poverty line. But in 2005, as costs and enrollment began soaring to unsustainable levels, Maine froze enrollment in its Medicaid expansion at more than 24,000 adults. Within the first six months, nearly 8,000 adults (31 percent) had cycled off the expansion. By the end of the first year, nearly 13,000 adults (52 percent) had left the program. 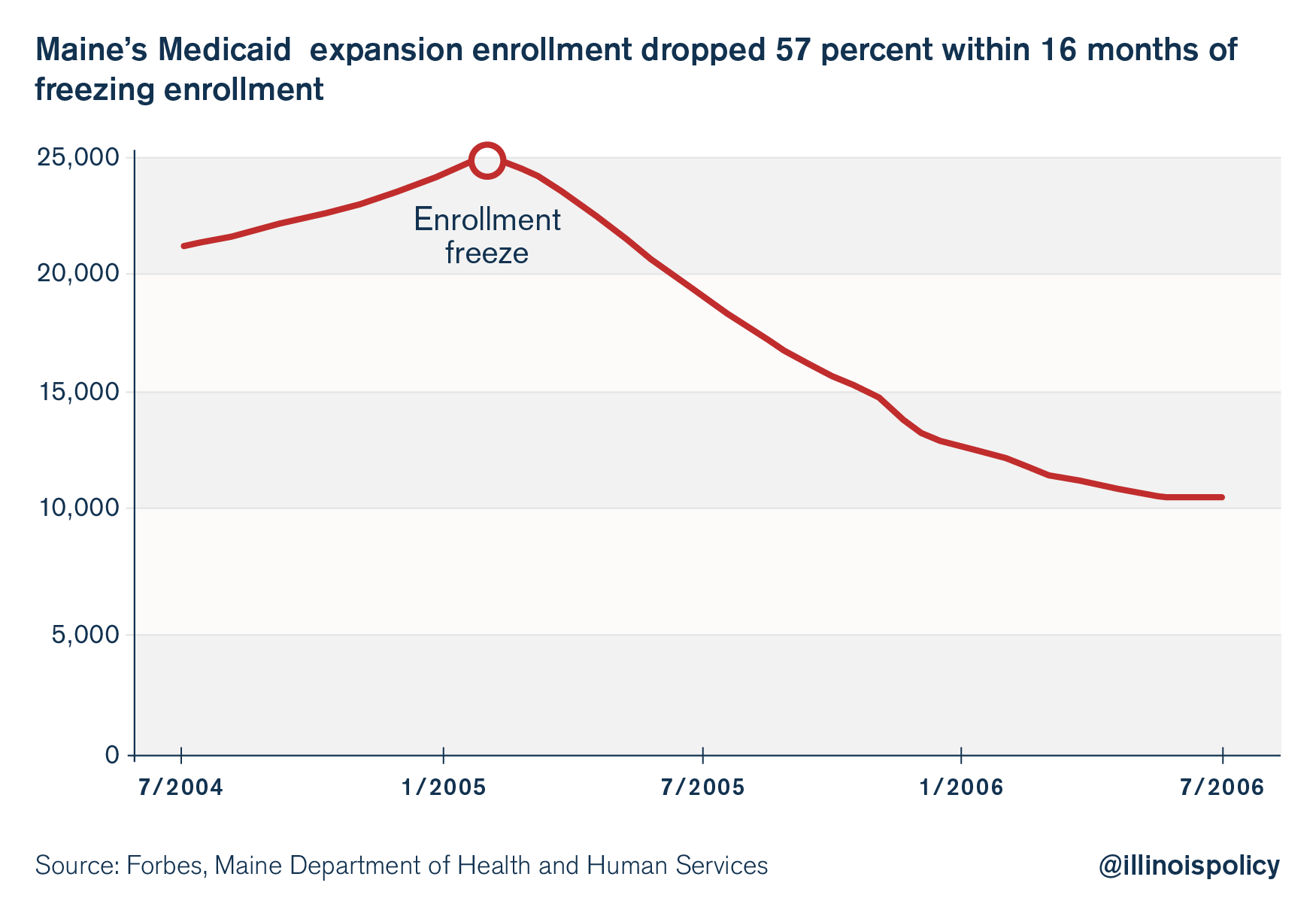 Maine re-opened and capped enrollment in the Medicaid expansion at various times over the next several years. Each time it froze enrollment, it experienced similar rates of attrition. The state imposed its last enrollment freeze in 2011, ultimately ending the expansion altogether at the end of 2013.

Based on these experiences in Arizona and Maine, if an enrollment freeze were implemented in Illinois, the state could expect 50 to 64 percent of enrollees to transition out of the program within the first year. That means roughly 323,000 to 410,600 Illinoisans would be freed from government dependency if the freeze was implemented, based on the latest enrollment numbers from the state – and that’s just within the first year.

An enrollment freeze is a simple and effective way to move able-bodied adults out of welfare and back to independence. But, most importantly, an enrollment freeze is a significant step towards prioritizing the truly vulnerable – folks like Jake Chalkey and the 18,000 plus Illinoisans on the state’s urgent needs waiting list. As the freeze is implemented and expansion enrollees transition back into self-sufficiency, limited state resources will be freed up for those who truly need help.

Congress is currently considering giving states the explicit authority to implement enrollment freezes at any time, without federal approval, as part of their Obamacare rollback plan. Hopefully, Congress follows through with this policy change. But regardless of where Congress lands, with 5 percent of expansion costs falling on state taxpayers in January and rising thereafter, the Rauner administration can and should begin working immediately with the new presidential administration to obtain a freeze waiver. This simple yet powerful step will start to reverse Illinois’ Medicaid crisis and make the vulnerable a priority once again.

This article originally appeared at the Illinois Policy Institute on December 15, 2016.